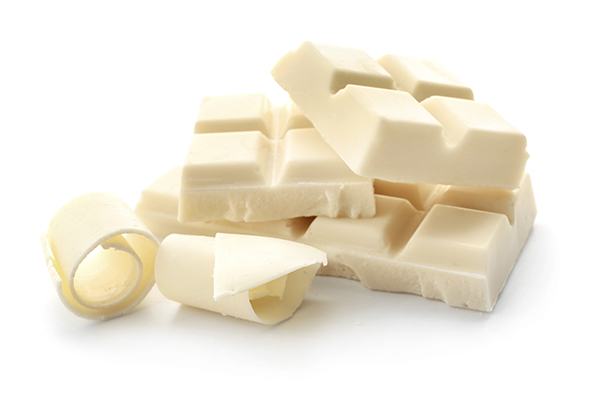 We know that white chocolate isn’t for everyone, but we urge people to give this humble, versatile, subtle and sweet treat a chance. White chocolate is always kind of there in the background, just waiting to be appreciated. And since National White Chocolate Day came and went on September 22 without much fanfare, we thought we’d take a closer look at the lovely snack, and give it the credit it deserves.

But… is it even chocolate?

It’s true, white chocolate might not technically be considered chocolate in some circles of thought, and even the FDA’s definition of chocolate technically doesn’t include white chocolate since, according to the federal body: to be called ‘chocolate’ a product must contain chocolate liquor, and that it requires that the bar be made up of at least 10 percent cocoa mass (nibs plus the cocoa fat inherent to the bean). This is what gives the final product of milk and dark chocolate the bitter intense chocolate flavor (and color).

But who are we to discriminate? White chocolate is definitely still in the chocolate family, so let’s not get too bogged down by technicalities. White chocolate does originate from the cocoa (cacao) plant, even though it does not contain chocolate liquor. Even a quick scan on the internet will prove that there are staunch defenders and retractors of white chocolate, so let’s leave the debate alone and talk about some more of the interesting facts about the stuff.

So… what’s the story here?

How Did White Chocolate Come to Be?

The origin of white chocolate is a nice, sweet story. White chocolate was invented by the chocolate empire we all know and love, Nestlé, in Switzerland. While some of the details are vague, the story goes that sometime in the 1930s, there was an excess of milk powder, as a result of overproduction from World War I, and, suddenly, a lack of demand.

Nestlé experimented with different recipes until they landed on the ingredients and proportions of what is the basis of white chocolate today: cocoa butter, sugar, milk solids (and sometimes vanilla). Other chocolate companies that existed at the time also started making their own versions of white chocolate in the 1940s.

White chocolate began to make its way across the globe, in different forms. According to research, from about 1948 until the 1990s, the original creators, Nestlé, produced and sold a white chocolate bar with almond pieces called the Alpine White. This was available for consumers in the United States and Canada.

Hershey joined the party and began mass production of white chocolate “kisses” in the 1990s. Each of us likely has a memory of this treat, unwrapping the foil and the unique shape of the treat that was ubiquitous during Valentines Day.

Going back to the FDA, who has the legal authority to draw the line on what does and doesn’t make a food product a legit thing. In 2004, in response to petitions filed by the Hershey Company and the Chocolate Manufacturers Association (now part of the National Confectioners Association), the FDA formally created guidelines on what constitutes white chocolate. Usually this is done in order to keep standards high, and so that white chocolate-adjacent products can’t make claims to be the treat.

As such, it was decided that the mild confection needs to have a cocoa butter content of at least 20 percent (and, of course, does not require the inclusion of cocoa nibs) in order to be called white chocolate.

What’s Next For White Chocolate?

Public love for white chocolate seems to come in waves – at times it enjoys popularity, and at others it fades into the background. We are happy to report that these days, white chocolate is having something of a resurgence! And that’s because chocolatiers and high-end dessert makers are giving it new life.

Pastry chefs are finding new ways to incorporate white chocolate into their creations, and finding ways to enhance and experiment with the confection. Some examples include infusing ingredients like:

White chocolate makes the perfect vehicle for other flavor profiles because of its mild base flavor, rich texture and amazing “mouthfeel”, or the way it perfectly and smoothly melts in the mouth. We see a long future ahead for this versatile treat.

In case you want to dive a little deeper, here are some extra fun facts about white chocolate

White chocolate is solid at room temperature 77 °F because the melting point of cocoa butter, the only cocoa bean component of white chocolate, is 95 °F.

Because it has no cocoa liquor, white chocolate has very little caffeine compared to regular chocolate, making it an excellent treat if you’re craving a square of something sweet a little later in the day.

In our humble opinion, chocolate is something to savor, no matter which way you like it – whether that’s white chocolate or another variation. At the end of the day, it’s about giving yourself a little treat and enjoying the little things in life. Buy white chocolate today!