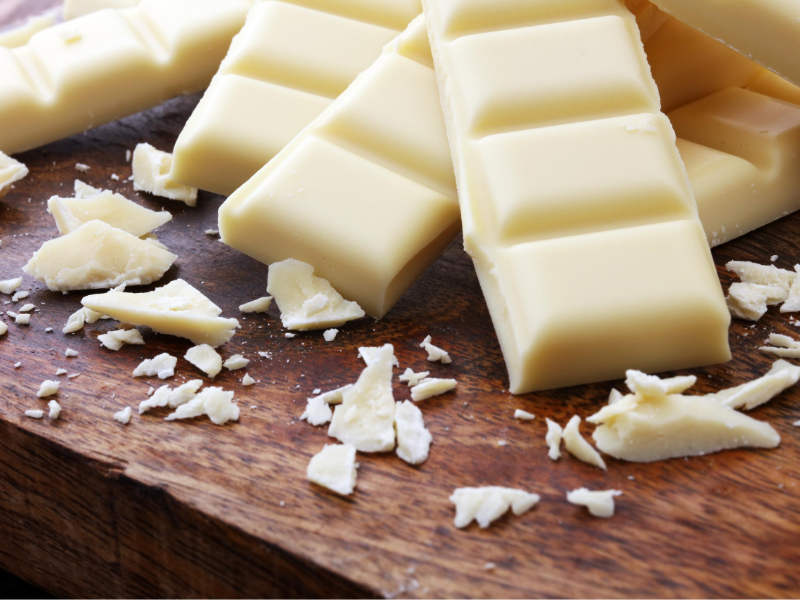 If you are a chocolate lover, you likely have your preferences. Those who love dark chocolate are firmly in that camp, even though they’ll bend to a delicious milk chocolate treat from time to time.

Connoisseurs who dine only on milk chocolate — who have a bit more of a sweet tooth — might allow some dark chocolate through from time to time, but they will seek out and are committed to the smooth, silky texture of a delicious, sweet milk chocolate.

Then there is white chocolate. This is usually where the real division comes in. Some people love it and when faced with the choice between milk, dark, and white chocolate, they will, without a second thought, choose white chocolate. Others will simply ignore its existence.

Is White Chocolate Even Really Chocolate?

The answer really depends on how you look at it. Technically… no. White chocolate doesn’t really count as chocolate (we’ll explain why in a second, an argument can still be made that it is). But if we’re looking at whether or not white chocolate belongs in the chocolate family because of sentiment, then sure! White chocolate is sort of like a second cousin: not totally in the inner circle, but definitely still part of the family.

The reason white chocolate doesn’t always make the cut comes down to ingredients. Let’s first take a look at what chocolate really is and go from there.

The road from cocoa beans to chocolate is a long one. First, cocoa beans are removed from their pods, then fermented, dried, roasted, cracked open, and their shells are discarded. The remaining material is what we call a nib. (You’ve likely seen chocolate nibs sold at health food stores in their raw state, falling into the “superfood” category. They can be added to smoothies but do not expect them to taste like chocolate as we know it!)

Chocolate nibs are next ground into a paste called chocolate liquor, which and can then be separated into cocoa solids, which provide the flavour, and cocoa butter, which is the fat.

This is where the divide happens. White chocolate does contain cocoa butter, but it does not contain cocoa solids, this is what arguably makes chocolate, chocolate.

Spot the difference? Some might argue that white chocolate is simply a confection, or “a dish or delicacy made with sweet ingredients.” But there are those that say since it contains part of the cocoa, it counts. How do you want to look at it? That white chocolate is its absence of cocoa solids? If we’re going to get really into the nitty gritty, white chocolate technically does have cocoa, but only its fat part. Does that make it count? You decide!

How Did We Get Here?

How did white chocolate even come to exist? The mostly agreed upon story is that Nestlé first came up with the concept and began developing the treat on a large scale in the 1930s in Switzerland. The story goes that white chocolate was a way to use up excess milk powder that had been produced for World War I and was no longer in demand. You know how it was during those war years — absolutely nothing goes to waste.

White chocolate, like its darker counterparts, comes in an array of qualities. If you are looking to do some tasting research on your own, make sure that you are consuming the high quality stuff with simple pure ingredients and free from fillers and stabilizers.

What’s the Point of White Chocolate?

Ok, so the big question… what’s the point of white chocolate, then?

The depth and weight of this discussion is pretty astonishing, and some of the country’s biggest media outlets have written full articles about white chocolate, making a case for its respect and rightful place in the history books.

The argument that was made in the Washington Post and reprinted in the Chicago Tribune is that we are looking at white chocolate all wrong, and that the confection, when done correctly (that is made with only cocoa butter, milk and sugar) is “a canvas for other flavors, offering ‘surprising breadth and utility.’” In other words, it is in a class of its own.

Using only the highest quality ingredients (ie. cocoa butter that isn’t deodorized or bleached), as well as an interesting spin like non-dairy milk or goat’s milk, white chocolate, certain connoisseurs argue, is at the frontier of new and exciting sweet flavor combinations. Here are a few of the combinations they list:

(These last two are from the mind and talent of German chocolate maker Georgia Ramon.)

Do these sound exciting or intriguing to you? Well, the reason these combinations can exist at all is because they are created with white chocolate. The same experiments with milk or dark chocolate would fail since they would overwhelm and overpower any of the more subtle combinations listed above. This perhaps proves the value of white chocolate!

At the end of the day, it’s time to let go of the things that divide us and unite of the things we have in common, which is usually an appreciation for the yummy things in life. Chocolate, in whatever its form or combination, is the great equalizer for humanity, so let’s set aside our differences and enjoy white chocolate bar what we can.