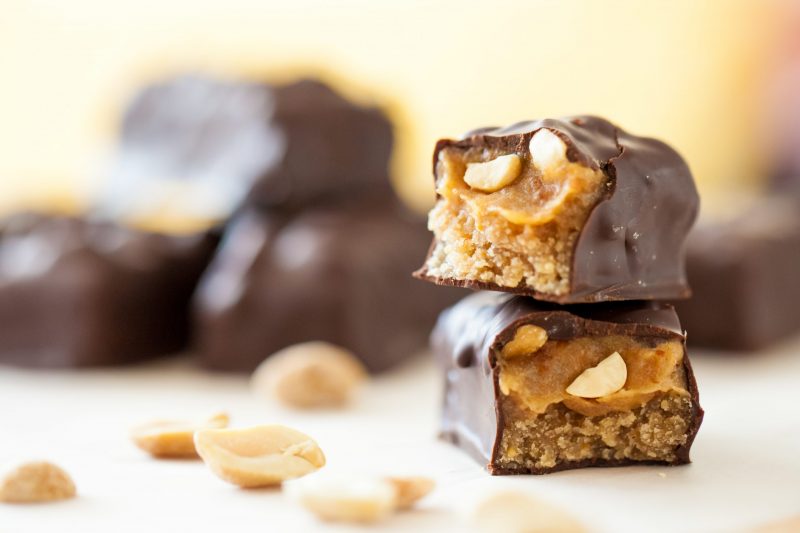 Chocolate bars are loved world-wide and by people of all ages and stripes. So how did this humble confection take over the world? What are its origins?

That is the tale we will tell today. Read on for the story of the first chocolate bar.

Let’s start at the beginning

The origins of chocolate itself can be traced back to Southern Mexico or Central America to around 450 BC. (Some sources claim many centuries earlier, to 1200 BC). At this time, cocoa beans were turned into a liquid, mixed with spices and corn puree and the drink was used in ceremonies or as an elixir for strength and virility.

Chocolate didn’t arrive in Europe until sometime in the 1500s, when sugar was promptly added (cocoa beans are naturally very bitter). Since it was a rare and delectable treat, chocolate was usually reserved for the upper class or even royalty. Over time and with improvements in manufacturing and distribution chains, chocolate became ever more accessible.

As time went on and chocolate production grew, it was usually sold in markets by weight in loose bits and chunks. Patrons were expected to bring their own bags or packaging and it was enjoyed this way for many years.

In the mid 1800s, the Industrial Revolution was changing the very fabric of life and having an effect on every imaginable field and trade, food production included. It was around this time that mechanization was applied to chocolate creation and this gave birth the the first manufactured chocolate bars around 1847.

This was when a British man named Joseph Fry, along with his son, first pressed a concoction of cocoa powder and sugar into the shape of a bar, and it took off. The creation caught the eye of another confectioner named John Cadbury (sound familiar?), and other chocolate bars soon hit the market.

Instead of competing against each other, Mr. Fry and Mr. Cadbury joined forces and started an empire that has lasted to this day.

Other confectioners throughout Europe soon joined the party. A man named Henry Nestle (also a familiar name) and a Swiss man named Daniel Peter created something we know today as milk chocolate, when they had the idea to add milk to the traditional recipe. It took a while to crack the code, with the secret being condensed milk! Thanks to them we have the smooth and creamy chocolate that we know and love today.

Until this time, chocolate had not become a complete global phenomenon. What changed that was World War I. The US government began acquiring huge quantities of chocolate and creating chocolate bars to give to their soldiers fighting the war. Once the war was finally over, demand for chocolate bars on American soil skyrocketed as the returning men had become accustomed to the treat.

Following the war, around 40,000 different varieties of chocolate and candy bar flooded the market!

That was around a century ago, and the rest is history. Many people today see chocolate bars as a staple of life, and they are available in nearly every store — from gas stations to corner stores to supermarkets to gift shops.

Chocolate itself has had a long journey, and a few elements needed to come together to result in the wide array of chocolate bars we see today. And chocolate bars continue to evolve, with brand new types appearing regularly. Some stick, others fade away and some are available as a limited special offer, or are only around during holidays.

Another tactic we see is taking familiar and recognizable chocolate bars and turning them into new forms. M&Ms in chocolate bars, for example, or peanut butter cups in miniature form. I’m sure there are others you can think of!

This brings up another point that often crosses our minds… what exactly constitutes a chocolate bar? Because these days, all kinds of chocolate creations not in bar form are considered a chocolate bar. Bits, cups, chunks and pieces — I’m sure you can think of plenty of examples — are marketed and sold as chocolate bars. Which basically brings us back full circle to the beginning of the chocolate bar’s origin story, when chocolate was sold in bits and chunks by weight in the market.

So there you have it, and we are sure the story of chocolate has a few more chapters that will unfold in the future. For now, I will leave you with some wild facts about chocolate for your enjoyment.

If you want to see some of the oldest preserved chocolate bars, you have to travel to Warsaw, Poland where two pieces of white and dark chocolate made between 1764 and 1795 for the king of Poland, Stanislaus Augustus Poniatowski, are on display. They were made as a gift for his courtiers and are kept at the king’s summer residence, Palace on the Water.

Chocolate and its effects on the body and mind are studied widely to some happily positive conclusions. A study done at the Columbia University Medical Center seems to have shown that chocolate can improve your memory.

Another study completed at the University of Granada looked at 1,500 teens and took note of any changes to their waist circumference, body mass index, and body mass percentage. The teens who regularly consumed chocolate in their diet had lower levels of fat in their abdomens and lower total body fat.