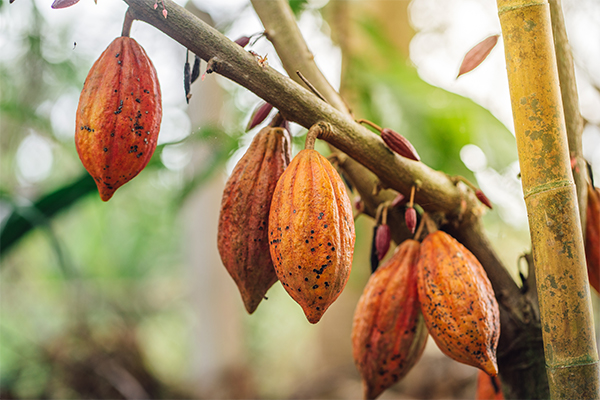 Sweet, sweet chocolate. There’s really nothing like it! No other treat is enjoyed in such quantities, across the globe, alongside almost every celebration. From birthdays to holidays, from cakes to bars to coins – chocolate transcends divides and unites people.

Chocolate has a long history and has taken on a life of its own. Today, we are going to go a little deeper into the fun side of chocolate, unveiling 10 sweet chocolate facts you (probably) never knew!

Top 10 Chocolate Facts You Should Know

1. Chocolate Grows On Trees (Sort of)

Cacao beans are the fruit of the Theobroma tree. These incredible beans grow inside football shaped pods and are harvested by farmers before they are put through a process of fermentation. After fermenting, the beans are roasted, ground, and turned into nibs that are used in to make chocolate as we know it today. And the tree and its fruit were highly regarded — the scientific name for the tree that chocolate comes from, Theobroma cacao, means “food of the gods.”

2. Chocolate Was Once Used As Currency

That’s right – cacao beans were so valued in Mayan culture that they were exchanged in a similar fashion to how we trade goods for dollars today. In fact, cacao beans were so valued, they were considered to be worth more than gold dust! For those who want to cheat the system and just start growing your own Theobroma trees, and therefore literally grow your money on trees, the leaders of the society were already one step ahead – the cultivation of cacao trees was restricted… but maybe there was a black market for “counterfeit” or illegally grown beans.

3. Chocolate Used To Be A Ceremonial Elixir

Speaking of Mayan times – back then, before the global proliferation of sugar, chocolate was brewed into a bitter liquid form and drank, rather than chewed. It tasted nothing like the hot chocolate we know and enjoy today. This chocolate elixir was a sacred and powerful beverage served only to the elite, and it was often distributed during religious ceremonies, marriage ceremonies and even in the Mayan version of baptisms. Mayans were known to mix their brew with herbs, spices and chili.

4. It Takes A Lot of Beans For One Bar

To create the chocolate that we know and love today, it is a long process that requires an intense amount of ingredients and labor. It takes 400 cacao beans to make just one pound of chocolate. And the world eats A LOT of chocolate, which means the earth has the grow A LOT of beans. Here’s a breakdown: Each Theobroma cacao tree produces approximately 30 to 60 pods per year. Each of these pods contains around 40 beans. If you’re still with us, you can start to comprehend the scale of the industry because each tree only produces two to three pounds of chocolate per year. Now it makes a bit more sense why good chocolate is so expensive.

5. It Took a Long Time For Milk Chocolate to be Invented

Some inventions happen overnight or completely by accident, while others are so close for so long… until there is that aha! moment. Milk chocolate was one of those long-haul creations. Daniel Peter, a Swiss chocolatier, spent eight long years trying to perfect a recipe for milk chocolate. Finally, in 1875, he realized that condensed milk was the missing ingredient and milk chocolate as we know it today was born. Thanks goodness for his perseverance!

6. Chocolate Has a Special Melting Point

Chocolate is the only edible product that we know of that melts around 93° F, just a little bit below the average human body temperature. That’s why chocolate melts so perfectly on your tongue. It’s also the reason why the candies M&Ms were invented – the hard shell allowed it to be transported and distributed to soldiers in WWII. The slogan “melts in your mouth and not in your hands” is a literal description of why they were created!

It seems that there are always studies in the news about the way chocolate interacts with our health, and there have been some very interesting connections discovered. The very smell of chocolate increases theta brain waves, which can trigger relaxation. Chocolate also contains tryptophan, which the brain uses to produce serotonin, a hormone that causes generalized euphoria. So, if you are ever feeling anxious or blue, chocolate be able to give you the little boost you need to change things around.

8. We Owe Our Current Chocolate Supply to Africa

9. Chocolate Has Its Own Celebration Day (Actually Multiple Days)

Mark your calendars, July 7 is “Chocolate Day!”  This is a day to remember when chocolate was first brought to Europe on July 7, 1550 (though this can hardly be truly confirmed and some sources argue that it chocolate could have arrived in Europe in 1504). But who cares? It’s an excuse to eat more chocolate. And there’s more! “National Milk Chocolate Day” is celebrated on July 28, “International Chocolate Day” on September 13, and “National Bittersweet Chocolate with Almonds Day” on November 7. We’re not sure who came up with this packed calendar, but we’re here for it.

10. The World Consumes A Lot of Chocolate

Americans don’t actually eat the most chocolate in the world, that honor goes to Europeans, who really (really) love their chocolate. Globally, the human population consumes around 7.2 million metric tons each year, which is a lot of chocolate. Humans truly are incredible creatures!

We hope you enjoyed this trip through the wonders of chocolate, and it’s only scratching the surface. Chocolate is one of the most interesting edible products we have, and it’s no wonder why it’s a favorite the world over.